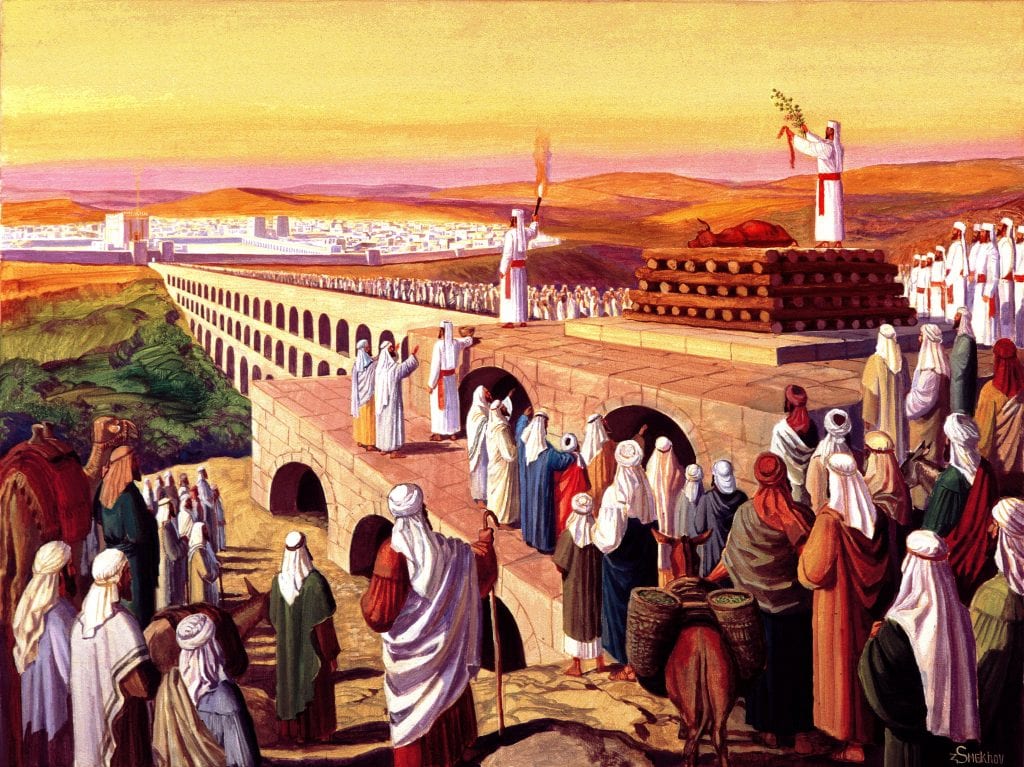 (Read Hebrews 7:1-25, preferably in The Message, to get a good idea of the Old Testament priests.)

The priests in the Old Testament basically had two functions. The first was to be the middleman or mediator between God and the Israelites. The priest talked to God and then conveyed His message to the people. In other words, the priest was God’s representative on earth.

The second very important role played by the priest was to make sacrifices to God on behalf of the people. In this way, the priest was the people’s representative with God. The people sinned and had to die – that was the punishment for sin. But instead of them dying, an animal was killed. Then God accepted the sacrifice.

The priest also sinned and the sacrifices were temporary. Therefore, the priests had to make regular sacrifices to God. This was not a sustainable solution. 18The former way of doing things, a system of commandments that never worked out the way it was supposed to, was set aside; the law brought nothing to maturity.

It simply didn’t work. Many people lost their way to heaven, because the solution wasn’t watertight. So, God made a new plan. 19Another way-Jesus!-a way that does work, that brings us right into the presence of God, is put in its place.

A priest without sin had to make sacrifices for the countless sin of mankind. And what sacrifice did He have to make? He had to die on a wooden cross. Instead of an ox or a sheep or a goat, He had to give up His own life so that mankind’s sin could be forgiven forever.

This was not a temporary solution that had to be repeated again and again. No, this is a permanent, last, final solution to the enormous problem of humankind’s sin.

Jesus was appointed as the last priest who finally had to play mediator between God and man. He succeeded 100%. He showed us exactly who God is and what God expects of us. But even more, He completed His second task successfully too – by sacrificing Himself for our sin.

The outcome is completely different from the old priests’ efforts: 22This makes Jesus the guarantee of a far better way between us and God-one that really works! A new covenant. Now you and I can reach God through Jesus.

God is no longer this sacrosanct God we have to fear. No, because our sin was paid for by Jesus’ sacrifice, the door to God is open forever.

When you and I are struggling in life, not knowing where to turn. When we have so many questions, wondering how we’ll make it to the end of the month. When we fear for our health and worry about our children. Now we can always turn to God and speak directly to Him.

Jesus, the High Priest, has made this possible with His sacrifice. So, let’s live like that. Live like saved people. Live like real children of God redeemed by the last and final sacrifice.

How do you understand Jesus’ role as High Priest?

What does Jesus’ last sacrifice mean to you?

How does it change the way you live?

Father God and Jesus Christ, how can I thank You for that final sacrifice? What an enormous sacrifice Jesus made to give His life as punishment for my sin, to restore my relationship with God! How can I say thank you, because a thank you is simply not enough. Amen.